As I continue my self-declared war on clutter in the areas of our home under my control (the garage, attic and my office), I am re-evaluating the necessity of each item I find.  Today, for example, I sorted through some magazines.

Let’s see . . . hummm.  Here is the July issue of Mechanix Illustrated.  Not July of last year.

As I scanned the Table of Contents, I discovered one article that was exceptionally prescient.   It was titled “The Mouse That Will Change Your Life”.  It was written by O . O. Binder.

Mr. Binder wasn’t referring to the warm-blooded variety of  mouse, or even the computer mouse.  The mouse referred to in this article was an acronym for “Minimum Orbital Unmanned Satellite Earth”.

Mr. Binder made the correct prediction that “orbiting around the earth at the fantastic speed of 18,000 mph, the first space satellite will herald the beginning of a new era in 1957”. 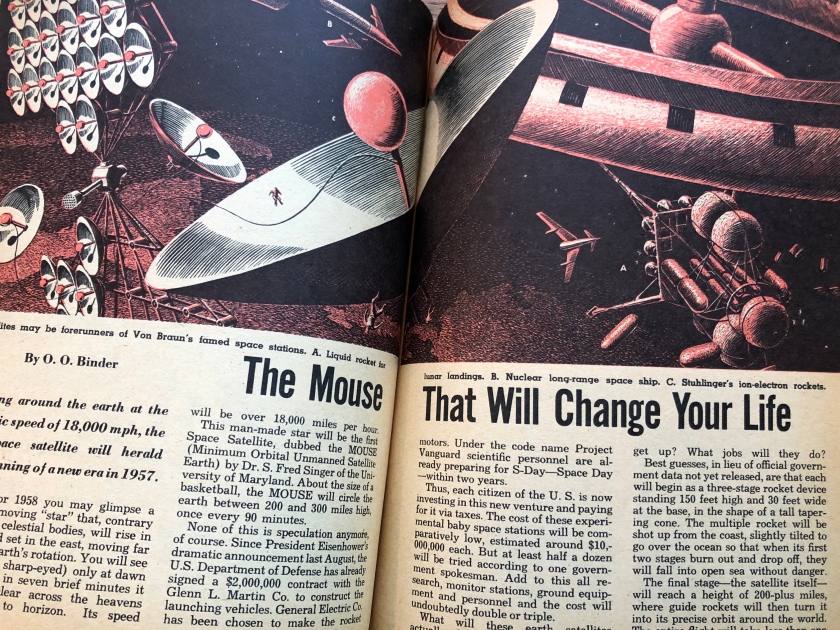 Mr Binder’s prediction was right on the money!

Unfortunately, it wasn’t the United States that accomplished it.  On October 4, 1957, the Russians got the attention of the United States and the world  in a big way with the launch of Sputnik 1.  And, just like Mr. Binder predicted, it circled the globe at the fantastic speed of 18,000 mph.

I remember reclining under the stars on a Cub Scout campout and watching Sputnik streak across the night sky.  It could travel from horizon to horizon in only 7 minutes.

Today there are 1,980 active satellites in orbit.

I think we can all agree that there is no way I can justify getting rid of this magazine.  I’ll leave that for my wife or son to do when I kick the bucket.

Simplifying is an ongoing struggle.  I am taking baby steps.

On Saturday afternoon, I dropped off a couple of bags of clothing at Goodwill.

It was my wife’s clothing.

I’d say we made some headway.

The Roaming Redhead
danventuretravels.wordpress.com/
A Note From Abroad